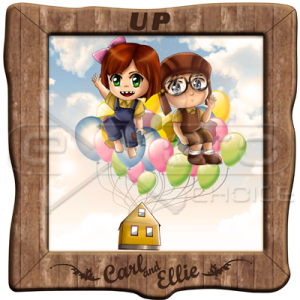 Exoro Choice’s Chibis – In the late 1930s, young Carl Fredricksen is a shy, quiet boy who idolizes renowned explorer Charles F. Muntz. Muntz has been accused of fabricating the skeleton of a giant bird he claimed to have discovered in Paradise Falls in Venezuela, and vows to return there to capture one alive. One day, Carl befriends a tomboy named Ellie, who is also a Muntz fan. She confides to Carl her desire to move her “clubhouse” — an abandoned house in the neighborhood — to a cliff overlooking Paradise Falls, and makes him promise to help her. Carl and Ellie eventually get married and grow old together in the restored house, working as a toy balloon vendor and a zookeeper respectively. Unable to have children, they repeatedly pool their savings for a trip to Paradise Falls, but end up spending it on more pressing needs. An elderly Carl finally arranges for the trip, but Ellie suddenly becomes ill and dies, leaving him alone.