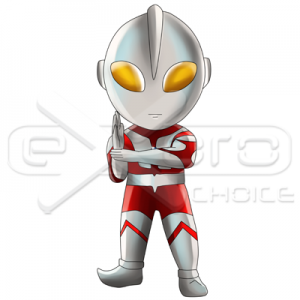 Exoro Choice’s Chibis – The branch of the Science Patrol that is focused on in the series is located in Tokyo, Japan. Led by Captain “Cap” Toshio Muramatsu (shortened to “Captain Mura” in the dubbed English-language version), the Science Patrol is always ready to protect the Earth from rampaging monsters, but sometimes it finds itself outclassed. When the situation becomes desperate, Shin Hayata, the Patrol’s most capable member, holds the key to salvation in the form of a power-object and artifact called the “Beta Capsule,” which, whenever activated, allows him to transform secretly into the super-humanoid-powered giant from space, who becomes known to the people of Earth as Ultraman.