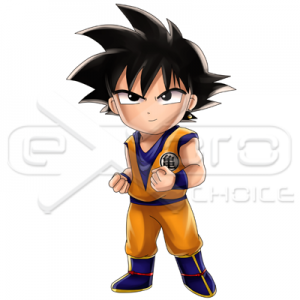 Exoro Choice’s Chibis – Goku, full name Son Goku, is the main protagonist of the Dragon Ball series. He is immensely strong, pure of heart, and extremely competitive, but dedicated to defending the Earth from evil. First introduced as a young boy, Goku was originally conceived by creator Akira Toriyama as a variation of Sun Wukong, protagonist of the Chinese novel Journey to the West; wherefore Goku also sported a prehensile tail until later. Upon meeting Bulma at the beginning of the series, the two then embark on an adventure to gather the seven Dragon Balls. After, Goku receives martial arts training from Kame-Sen’nin, meeting his lifelong friend Kuririn and learning the famous Kamehameha technique, and enters the Tenka’ichi Budokai to fight the strongest warriors on the planet. When the evil Piccolo Daimao, and later his offspring Piccolo, tries to rule the world, Goku receives training from “gods” to defeat them.