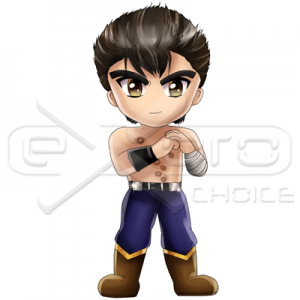 Exoro Choice’s Chibis – Fist of the North Star is a 1986 Japanese animated film adaptation of the manga series of the same name. It was produced by Toei Animation, the same studio who worked on the TV series that was airing at the time, with the same cast and crew working on both projects. The film adapts the storyline of the manga from the beginning of the series up until Kenshiro’s first match with his rival and elder brother Raoh, with many liberties taken with the order of events and how the story unfolds (including the roles of several characters). However, the film retains the more violent content of the original manga, which the television series lacked.