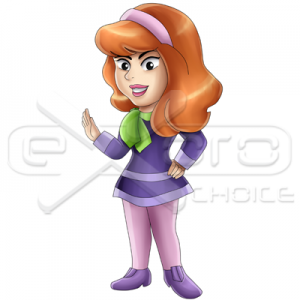 Exoro Choice’s Chibis – Together with her other teenage companions, Fred Jones, Shaggy Rogers, Velma Dinkley, and Shaggy’s pet Great Dane Scooby-Doo, Daphne would engage in solving various mysteries. Daphne was portrayed as the enthusiastic, but clumsy and danger-prone, hence her nickname “Danger-Prone Daphne” (revealed by her cousin, Shannon, being danger-prone is a Blake family trait in Scooby-Doo! and the Loch Ness Monster), member of the gang, who always follows her intuition. She serves as the damsel in distress and would occasionally get kidnapped, tied up, gagged, and left imprisoned. Scooby and Shaggy usually save her, but sometimes Fred and Velma or even the whole gang do it. But as the franchise went on, she became a stronger, more independent character, who can take care of herself. Daphne’s character is the most developed in the starring cast, going from a klutzy teenager to a successful journalist to an ingenuous fashionista to a black belt martial artist.