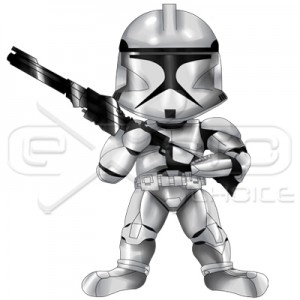 Exoro Choice’s Chibis – The Imperial Stormtroopers are fictional soldiers from George Lucas’ Star Wars universe. They are the main ground-force of the Galactic Empire, under the leadership of Emperor Palpatine and his commanders, most notably Darth Vader and Grand Moff Tarkin. The order of battle of the Stormtrooper Corps is unspecified in the Star Wars universe, but its numbers are far fewer than those of the Imperial Army’s regular troopers.