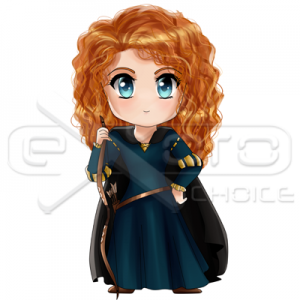 Exoro Choice’s Chibis – Princess Merida is the 16-year old daughter of Queen Elinor who rules the kingdom alongside her husband, King Fergus. Queen Elinor’s expectations of her daughter make Merida see Elinor as being distant while also causing friction between the two. Despite Elinor’s desire to see Merida as a proper royal lady, Merida is an impetuous, quick-witted girl who wants to take control of her own destiny.