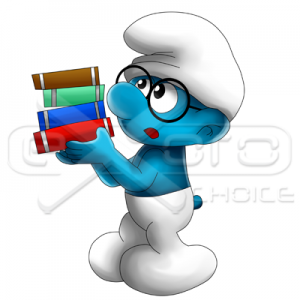 Exoro Choice’s Chibis – Brainy Smurf considers himself the most intelligent Smurf in the village and an expert on everything, although his actual knowledge is questionable at best; often, his attempts to help in a given situation leads to more problems. He is Papa Smurf’s third-in-command, although even Papa Smurf himself is often tired by his sanctimonious attitude. He can be distinguished from the others by the large glasses he wears. He also has archived his self-perceived wit and wisdom in volumes of books entitled “Quotations from Brainy Smurf.” The Smurfs most often respond to his self-righteous preaching by either tossing him out of the village or getting clobbered with a hammer (usually off screen). Most of the time, the other Smurfs never listen to his plans. His original name translates to “Smurf with Glasses”, highlighting the fact he is not actually smarter than the other smurfs, even though he fancies himself to be. The image can be customized for specific use.