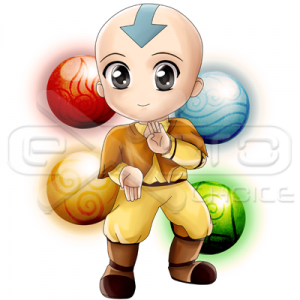 Exoro Choice’s Chibis – Aang is the twelve-year-old, fun-loving, Airbending protagonist of the series. Although averse to fighting, Aang is fiercely protective of his friends. He is the current incarnation of the planet’s Avatar Spirit, and is therefore required to act as arbiter among the various people. According to the show’s creators, the arrow-like tattoos on his forehead and arms mark Aang as an airbending master; Aang being the youngest airbender in history to have earned them. His mentor, Monk Gyatso, was the greatest airbender who had ever lived, according to Aang. Aang develops a romantic crush on Katara. He attempts to tell her so, but fails continuously until the final passionate kiss in the last episode.