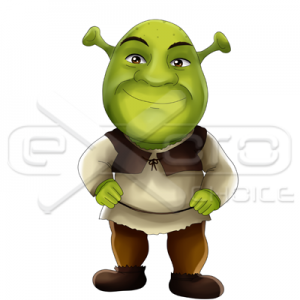 Exoro Choice’s Chibis – Shrek a large, green, physically intimidating ogre, with an accent described by Mike Myers as “a Scottish guy who’s lived in Scarborough for 40 years”. Even though his background is something of a mystery, in the musical, it is revealed that on his seventh birthday Shrek was sent away by his parents because it was an ogre tradition (like in the book where his parent send him away). He is seen traveling alone, either being screamed at or teased by passers-by. The only time he receives a pleasant greeting is a wave from a young Fiona, who is promptly led away by her parents. After scaring away an angry mob, he arrives at his swamp, enters an outhouse and literally breaks out as the adult Shrek. Though surly, misanthropic, and venomously cranky, Shrek is peaceful and doesn’t care to hurt anyone, but he just wants to live his life in solitude and be left alone.