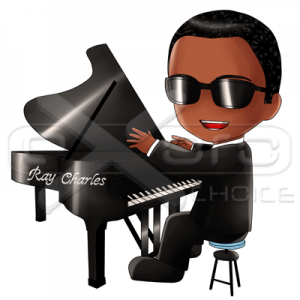 Exoro Choice’s Chibis – Ray Charles Robinson (September 23, 1930 – June 10, 2004) was an American musician known as Ray Charles. He was a pioneer in the genre of soul music during the 1950s by fusing rhythm and blues, gospel, and blues styles into his early recordings with Atlantic Records. He also helped racially integrate country and pop music during the 1960s with his crossover success on ABC Records, most notably with his Modern Sounds albums. While with ABC, Charles became one of the first African-American musicians to be given artistic control by a mainstream record company.