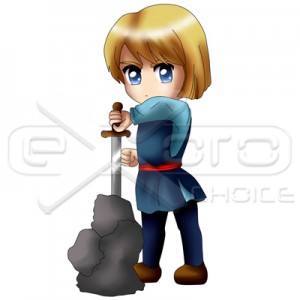 Exoro Choice’s Chibis – King Arthur is a legendary British leader of the late 5th and early 6th centuries, who, according to medieval histories and romances, led the defence of Britain against Saxon invaders in the early 6th century. The details of Arthur’s story are mainly composed of folklore and literary invention, and his historical existence is debated and disputed by modern historians.