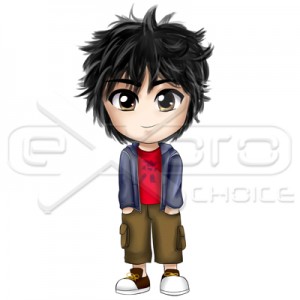 Exoro Choice’s Chibis – Hiro Hamada is a young boy with intelligence far beyond his years. Because of this, he can be rather brazen and cocky (especially when he was seen to be bored on during his bot fight with Mr. Yama), but never to the point of arrogance. He spends much of his time using his technology to win money through illegal bot fights (although he claims that bot-fighting isn’t illegal, but betting on it is. Regardless, he still does it illegally), something he prides himself on, though his older brother Tadashi heavily disapproves. Whilst Tadashi feels his brother has a greater purpose and should attend college, Hiro believes he holds the knowledge of all that there is to know in the world, showing a strong sense of pride.