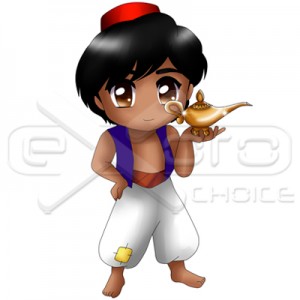 Exoro Choice’s Chibis – A poor, but kind-hearted Agrabah thief. Weinger sent in a homemade audition tape with his mother playing the Genie, and after several call backs he found six months later that he had the part. The character's singing voice was provided by Brad Kane, who also performed the character's speaking voice before Weinger was cast.